I Promise I’ll feature some charismatic megafauna eventually, but today I’m going to dive right into my weird hobby: mycology. 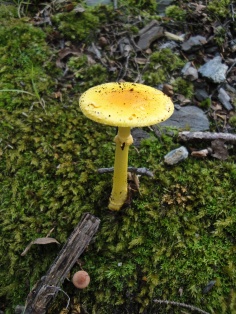 Several years ago my in-laws gave me a wittily-written mushroom guide book for Christmas. I picked it up that Spring, knowing very little about fungi, and found myself paging through it like a detective novel. I read the thing cover-to-cover and almost immediately stormed outside to search for and identify mushrooms. Ever since I have been absolutely fascinated by mushrooms and their kin.

Fungi tend to take a back seat to the animal and plant kingdoms. I suppose I understand – we’re animals, and we see compelling reflections of ourselves in other animals. Most of our food is either an animal or plant. Fungi don’t move or make noise, most of them are small, and after all the majority of the time we only directly observe their genitalia. Yet, fungi are involved in incredibly complex roles and relationships in every ecosystem worldwide.

One of my personal favorites is the ash-tree bolete (Bolitinellus merulioides). It’s funky looking, changes color when you poke it, and can often be found in huge patches. This mushroom is only found near ash trees (Fraxinus sp.), which led biologists to the assumption that mushroom and tree were mychorrizal partners (short version of that link: a symbiotic relationship between fungi and plants). More recently it has been discovered that the mushroom’s presence near ash trees is actually due to a symbiosis with a species of aphid which only feeds on ash trees. Further complicating all of this is a penchant for defying classification; B. merulioides has bounced around among four genera. This three-way relationship further interests me because it’s a lesson in the fragile balance of nature. The introduced emerald ash borer threatens the whole trio and more. As a bonus, the ash-tree bolete is edible (but it tastes like a moldy old loofah, so don’t, you know, actually eat it).

Experienced mushroomers will quickly get bored by this next passage, but I want to cover some mushroom basics and clarify a few common misconceptions.

A mushroom is a fungus with a fleshy fruiting body (and the word “mushroom” is not a particularly precise term). The fruiting bodies are what we most often see, but these are only the reproductive organs of the fungus. They manufacture spores, which are distributed through the environment through various means – wind and animals, mostly. The rest of the fungus is called the mycelium and is usually a white, stringy substance that lives underground or in rotting wood, decomposing leaves, etc. It can sometimes look a lot like spider silk. A new mycelium will form when spores wind up in the right place and the right conditions develop – something that can take a really long time. I have to say that as a member of a species somewhat preoccupied with hiding its genitalia, I am intrigued by the existence of such a wide array of living things that display their genitalia while hiding everything else.

There is no simple rule of thumb that can adequately distinguish an edible mushroom from a poisonous one. Many supposed methods have been championed through the years, but all of them are dangerously wrong. Further clouding the issue is the word “toadstool” which is often used to mean “any poisonous mushroom” but also to describe the common cap-stem shape. Many mushrooms with that classic shape are perfectly edible and mushrooms of many shapes can be lethal if ingested. Another way to put it: edible and poisonous mushrooms don’t fit into neat categories, so the determination must be made by identifying the species of mushroom specimen-by-specimen. All of that said, I think there is a little more fear of consuming wild mushrooms than is warranted. The same problem exists for plants and animals, but since those are so much more familiar to most people we’re a lot more ready to accept that an eggplant is edible but deadly nightshade is not. It’s certainly very dangerous to pop any random unknown fungus into your mouth, but if you educate yourself and are certain of your identification then mycophagy – the practice of eating mushrooms – is reasonably safe.

One of the key identifying features for mushrooms can’t usually be directly observed in the field: spore color. Instead, one must bring specimens home and take a spore print, which can be surprisingly fun. The typical method is to slice off the cap and set it, gills-down, on a sheet of paper for a few hours. The resulting wheel-spoke patterns can be beautiful. I’m not particularly artistic but I have long wanted to figure out how to turn spore prints into nifty and complex designs. If one can identify a mushroom without the spore print, and thus predict the spore color, that’s a start… and apparently this is already at least attempting to be a thing. None of these is quite what I have envisioned, though. File under: cool ideas I am woefully incapable of putting into practice.

Of course it’s not all fascinating and/or delicious in the world of fungi. Some fungal diseases are downright horrifying and no one should eat foot fungus. The existence of these types of things is part of why fungi are so fascinating to me, though. There is as much diversity as in the animal and plant kingdoms but we know so much less about that diversity. Even though I’m not personally discovering anything new, when I collect and study mushrooms there’s an air of mystery – a puzzle to be solved. I’m on the frontier of my own personal knowledge and sometimes I’m led to read about the frontier of biology. It also helps that mushrooms don’t run, swim, hop, crawl, or fly away once I’ve found them; it’s nice to be able to take as much time as necessary to study all of the important characteristics.

One thought on “Mushrooms”