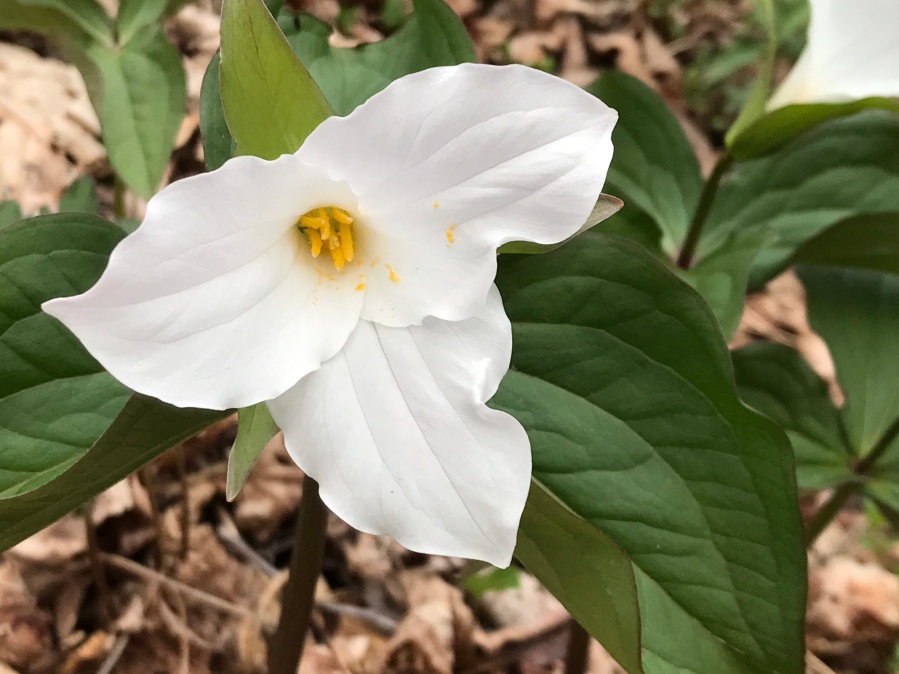 As always, this month’s journey was selected from Seasonal Guide to the Natural Year. The advantage to “early spring wildflowers” as a topic is that one can experience them more or less anywhere, without the need to target a specific destination. I chose Shenandoah National Park (specifically Big Meadows and the Mill Prong Trail) because it’s one of my favorite places and because it happened to coincide with another chapter in the book: The Blue Ridge in Blossom, also wildflower-related. Laurel, Frosclin and I hopped in the car on Good Friday and made our way there.

I have to admit, when we arrived at Big Meadows the wildflower prospects did not look quite like I had hoped…

Yeah. I later learned that this was a “prescribed” burn, meaning it was initiated and controlled by the Park Rangers. This is good for the environment but bad for people hoping to spot some exotic wildflowers in the meadow. Instead the meadow was charred and desolate at first glance. However, it was bursting with song sparrows (somehow still able to hide quite well) and other birds. At the woods’ edge one could almost feel the life poised to spring back out onto the open plain as soon as the time was right. Seeing the place like this was a mixed bag of emotions. We’ve been there in all four seasons and it shows stark differences from one to the next. Now we can add “fire season” to that list. It was fascinating, and I know the fire wasn’t “bad,” but I couldn’t help feeling a little bit wistful standing there among the ashes.

Things immediately returned to normal once Laurel chose the Mill Prong Trail as the locus for the bulk of our trip. At first I thought we’d be looking at a bit of a thin selection of flowers while seeing mostly not-yet-flowering plants. It was a little early and despite the mild winter the mountains of Shenandoah tend to lag a couple weeks behind the DC area in blooming. For the first half-mile or so of our hike that rang mostly true: we found dandelions, purple and downy yellow violets, more bloodroot, cutleaf toothwort, and spring beauties in bloom alongside the greenery of mayapple and false hellebore (and some other green plants I lack the skill to identify without their flowers). 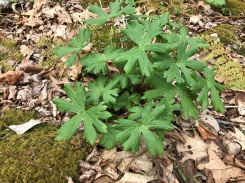 I was having that exact conversation with Laurel after spotting some trilliums that were just not quite ready to blossom when suddenly these kinds of plants began to give way to large-flowered trillium and trout lilies. scattered among them were a few wild geraniums and a smattering of star chickweed. Then we happened across a small patch of golden ragwort. Clearly spring had truly come to Shenandoah, and clearly Franklin had some sort of ragwort-related apprehensions.

Rounding out the blossoms as we approached the Rapidan Camp (more on that in a minute) were buttercups, mock strawberries, wood anemone, chickweed (of the non-astral variety this time), garlic mustard (boo), phlox, red maple, redbud, and one bush with tiny yellow flowers which I couldn’t quite identify.

The Rapidan Camp, which I had either never heard of or at least not known its significance, is a collection of cabins on lovely grounds just a few miles south of Big Meadows. This was apparently Herbert Hoover’s retreat during his Presidency and it is now largely as it was then. Apparently one of our worst Presidents at least had good taste! We happened upon an archaeology class there and chatted for a few moments about their project and our dogs. It was all just a wonderfully pleasant pause before we commenced our return hike.

Prior months of nature: