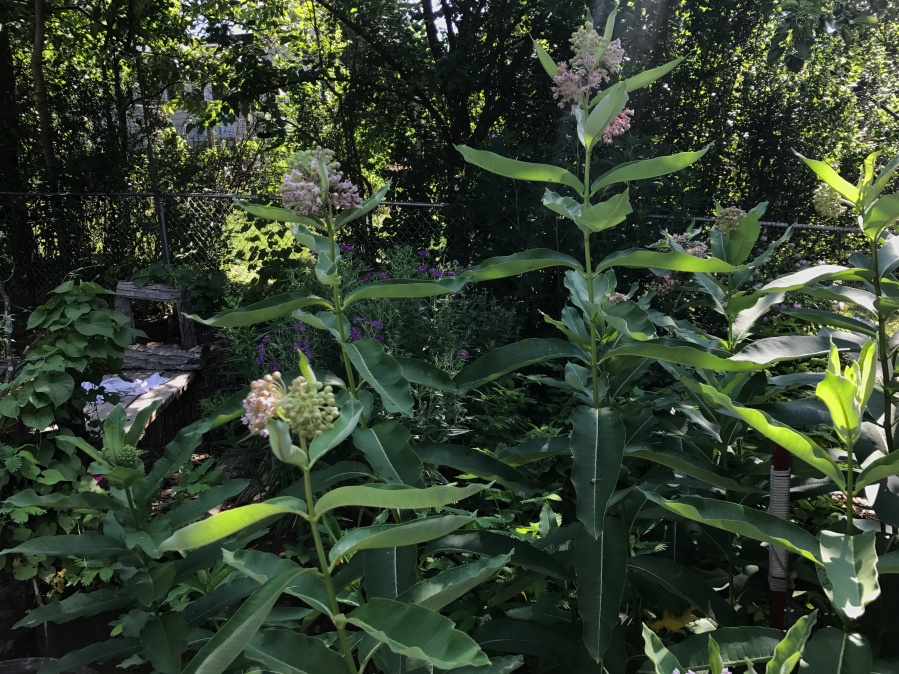 As the peak season for my butterfly garden begins to wind down, I find myself contemplating how it has performed over the past few years. It certainly has looked more impressive in each successive year, and most of the plants have continued to thrive. Yet, I don’t think that’s quite how I should measure the success of such a project. I don’t mean to say that I shouldn’t derive any satisfaction from the growth of the plants themselves – I certainly indulge in that sense of pride and I think that’s fine. The goal of this garden, though, is to support local biodiversity. If it’s not doing so, it’s failing and requires some analysis and change.

Unfortunately I can’t do a particularly scientific investigation. I’ve no control, since I didn’t do any kind of exhaustive analysis of the life in my yard before the butterfly garden. I’m still learning to identify a lot of the local fauna and so any trend of increase would be suspect. All I can really do is make a list of living things I have identified in my yard and record cases of animals exploiting the butterfly garden. Lack of scientific rigor aside, that’s not nothing!

Seems like the obvious place to start, no?  So far I have managed to count sixteen species of butterflies and seven species of moths in my yard since beginning the garden. That seems like a fairly small number, but there are certainly quite a few unidentified moths and some unidentified butterflies who have visited. Moths can be particularly vexing – the Maryland Biodiversity Project lists 2,529 species reported in Maryland alone.

I can only confirm one species of butterfly, the monarch (Danaus plexippus), as having completed a full life cycle in the butterfly garden. many others have taken nectar and I’ve spotted quite a few unidentified caterpillars, but monarchs are the champs. 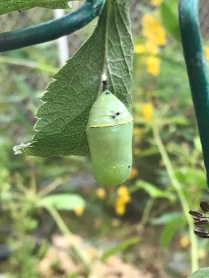 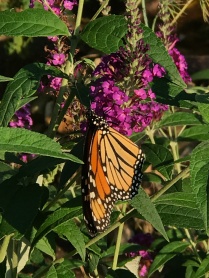 Above we have a complete monarch life cycle all documented within my garden: egg, hatchling caterpillar, late instar caterpillar, pupa, and adult. Thank you milkweeds!

Probably the most common visitors, or at least the most commonly seen due to their large, ostentatious nature are tiger swallowtails (Papilio glaucus). Their host plant is the tuliptree, which is abundant in the area. I don’t get to watch these guys grow but the adults are beautiful enough on their own. 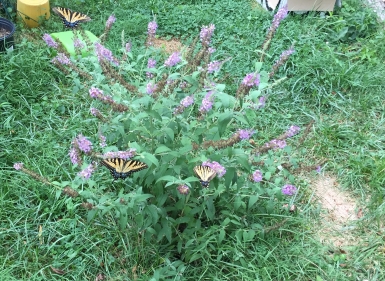 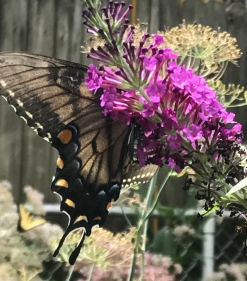 Some butterflies aren’t quite as exciting as others, and here I move from the largest, showiest bunch to the most boring: the cabbage white (Pieris rapae). Next to the tiger swallowtails these are probably the butterflies I see the most, and I usually don’t even bother trying to photograph them. Nevertheless, they are butterflies so they most certainly count!

In the same family (Pieridae) as the cabbage white is the larger, more attractive, and less common cloudless sulphur (Phoebis sennae). This can be separated from other sulphurs in our area by size – by comparison it is quite large. They’re not known to successfully breed in Maryland, but where they do breed partridge pea is a preferred host plant.

I’ll take the next two species, from family Lycaenidae, together because of their superficial similarities. Both are small, blue butterflies with splashes of red. They are both tiny enough to often go unnoticed. Without a detailed look at their markings, both are easily confused for one another and for many similar species throughout their respective ranges. The eastern tailed-blue (Cupido comyntas) is one of the most common butterflies of the Mid-Atlantic. I never realized this until last year, but once I was armed with this information I started seeing them constantly. However, due to their size and abundance other small, blue butterflies can often be mistaken for this diminutive wonder. Among those similar species is the red-banded hairstreak (Calycopis cecrops), which happens to be the only other member of Lycaenidae I have found in my yard.

a pair of eastern tailed-blues on New England aster 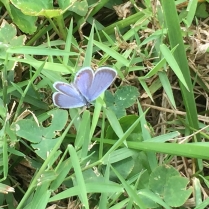 This next group, collectively called “skippers,” is sometimes separated from butterflies and moths as a third group of Lepidopterans and is classified in family Hesperiidae. I have no opinion on whether skippers are “butterflies” or something similar but different. I am including them with butterflies here for simplicity’s sake and not to take a stand. I do have an opinion on their confusingness: namely, they are. It’s a  challenge to identify skippers to species, with a few exceptions. So, take some of my specific identifications below with a grain of salt, although I have tried to be careful to count only those I have some reason to be confident in.

The silver-spotted skipper (Epargyreus clarus) is one of the exceptions. It’s a large, common skipper with distinctive markings and as such is incredibly helpful to the curious naturalist. That said, I’ve never found it a particularly compelling species and so I am ready to move on.

There are a LOT of small, basically orange, skippers. I believe the above is a least skipper (Ancyloxypha numitor). Even if this individual isn’t, I am quite confident that some of the skippers I have seen are. I don’t necessarily have photos of the individuals which are the most definitively representative of the species.

There are also quite a few small, basically brown skippers. Further confusing things is that some of them vary by sex and some species are sometimes brownish, sometimes orangeish, and there’s a bit of inherent overlap between what is “brown” and what is a sort of dirty orange. Apparently the truly diagnostic features can involve antenna shape and length, body shape, and other similarly hard to spot identifiers. Fortunately for me, the above skipper was identified by the experts at bugguide.net as a sachem (Atalopedes campestris).

This one was also IDed for my by the bugguide folks (who I can’t plug enough as a naturalist’s best friend) as a Peck’s skipper (Polites peckius). I arrived there myself first but it is always nice to have that expert corroboration. Anyway, see what I mean with all that “orange” and “brown” business?

I identified this zabulon skipper (Poanes zabulon) on my own. I was fortunate in that it is a female, because they seem much more distinctive than the males (which fall into that category of small, pale-orange skippers with similar patterns).

I’ll close out the butterflies with probably my most tenuous ID: the fiery skipper (Hylephila phyleus). Here I am going by the tiny dark spots on the orange wings, and I am really not sure that’s quite enough. This is a known and fairly common species in Montgomery County that does have those characteristics. I’m not quite knowledgeable enough to rule out all other species for certain.

Moths, as I mentioned above, are a far more diverse group of insects than butterflies. It’s a near certainty that more species of moths than butterflies have visited my butterfly garden. Somewhat paradoxically, that diversity so complicates things that I have only identified seven moth species.

Probably the coolest of these is the hummingbird clearwing (Hemaris thysbe). These things really do look and behave very much like hummingbirds.

The tulip-tree beauty (Epimeces hortaria), named for its host plant, is a bit drab but oddly beautiful for all that drabness.

Returning to the realm of moths that aren’t classically mothlike, I occasionally come across the ailanthus webworm moth (Atteva aurea). This little guy looks like a “true bug” or plant bug at rest but flies like a wasp.

My favorite moth find in my garden has to be Hypocala andremona, a species of “underwing” moth most common in Texas. Its host plant is the persimmon, one of which hangs over from our neighbors’ yard. I was clueless about this moth until once again bugguide came to the rescue.

One thought on “Butterfly Garden Progress Report Part 1 of 2”