The eastern tiger swallowtail (Papilio glaucus) is quite common in our region. It’s no less beautiful for its abundance. These beauties can be seen in virtually any meadow, stream bed, or other open area from Spring through early Fall. They are one of the more photogenic butterflies because of their size, coloration, and relatively relaxed movement. Along with the cabbage white, they are some of the most frequent visitors to my butterfly garden.

I recall referring to them decades ago as “yellow swallowtails” as distinguished from “black swallowtails.” I’m not sure if this was a regional colloquialism or my own failing; either way it’s confusing. The eastern tiger swallowtail has both a yellow and a black morph, and several local species of swallowtail are predominantly black. Black swallowtail is actually the common name of one of them. In parts of the Mid-Atlantic, it overlaps with the similar Appalachian tiger swallowtail (Papilio appalachiensis) and the giant swallowtail (Papilio cresphontes). The latter is fairly easy to identify by multiple characteristics, including its giantry. The former is a bit tricky and requires close observation of the trailing edge of the ventral forewing. The row of yellow dots found on the eastern is more of a continuous bar on the Appalachian.

Host plants include a variety of trees and bushes: tulip poplar, common lilac, black cherry, and species of ash and willow, for example. Many of these are common in the mid-Atlantic both as naturally occurring plants and as native ornamentals.

The adults will feed on just about any plant for nectar. I frequently find them on my butterfly bushes (my one non-native concession inside the butterfly garden) and they seem to love buttonbush (Cephalanthus occidentalis) as well. I’ve also seen them feeding from coneflowers, bee balm, thistles, Queen Anne’s Lace, and more. They seem willing to give a chance to any flower large enough to support them while they feed. 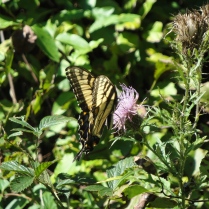 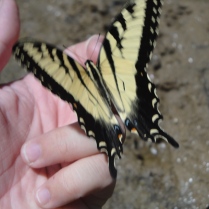