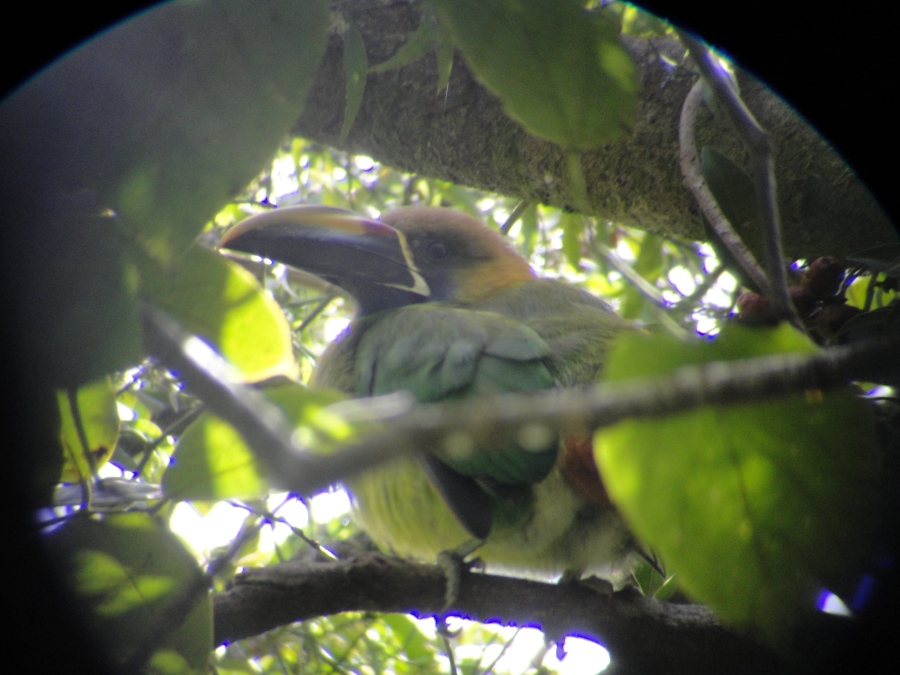 With most exciting and most abundant out of the way, it’s time for the most disproportionately beautiful group of animals in Costa Rica. That would be: birds. With a landmass about the size of West Virginia, Costa Rica is home to nearly 900 bird species – more than all of the US and Canada combined. With such variety in such tight quarters, one can’t help but stumble across some exceptional beauty now and again. Beyond that, even the most common birds seem more alive with color than our relatively drab robins, sparrows, and mockingbirds.

Much of the bird life does overlap with those familiar in North America, and we of course saw some of that: herons, egrets, and pelicans, for example, as well as many of the smaller brown or gray birds one tends not to really notice. But then there were the flocks of parakeets, the tropical kingbirds (Tyrannus melancholicus) and great kiskadees (Pitangus sulphuratus), and the two species of ani (black, crowlike birds with funky-looking beaks). 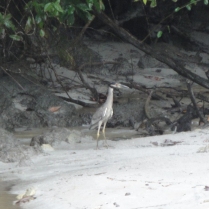 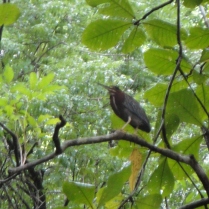 One of the two species of ani

One of my priorities on the trip was to see some magnificent frigatebirds (Fregata magnificens). As with the basilisks, I’d been fascinated by them since childhood. We got this out of the way quickly via an evening boat tour. I wish I had better pictures from that evening; I recall it more fondly than I can account for with what I have. Our vantage point was from a distance as they soared high above, but it was enough to know that “magnificent” is the right word.

Toucans were another priority bird group, due in this case less to personal reasons and more to the universal agreement on the awesome beauty of toucans. We found a couple of emerald toucanets (Aulacorhynchus prasinus) in the Monteverde Cloud Forest, and they remain among the most beautiful animals on my lifetime list. I also caught sight of one of the larger species (either a keel-billed or chestnut-mandibled toucan) in flight – a glorious but fleeting view from our moving vehicle.

Among all the fascinating wildlife I did see stands at least one significant miss: the scarlet macaw (Ara macao). It’s far from the only wonder I missed, but we did hear some in Carara National Park. It’s another of my bucket list species, so that was a little frustrating (the first-worldiest of first-world problems encountered in pursuit of a first-world hobby… perspective). Anyway, I’d have insisted we try for longer but this was our travel day (the one with the crocodiles) and we had a check-in time to make.

On our first hike through the Monteverde Cloud Forest, our guide set up his scope, said “black guan” and had us take a look. A black guan (Chamaepetes unicolor), it turned out, was a sort of dark-feathered, arboreal turkey. A tad smaller and a lot less ugly than its northerly cousin, it nonetheless had that same furtive head bob.

Then there were the hummingbirds. Costa Rica has over fifty species (compared to one where I live and twenty or so in the entire US). It seemed like we saw all of them. It was probably only a half-dozen or so species but hummingbirds seemed omnipresent, especially in Monteverde. Their being hummingbirds and my lack of a high-speed lens conspired to limit my photo ops somewhat. I was a bit annoyed that the hostess of our hotel had both hummingbird feeders AND an outdoor cat, and would point out its stalking of the birds with amusement. I didn’t say anything but did work in some surreptitious facepalms.

I’ve saved my favorite for last: the blue-crowned motmot (Momotus momota). This bird is a true standard-bearer for the beauty of nature.The blue crown for which it is named is maybe the third or fourth thing one notices, after the blue discs at the end of its very long tail feathers and the sharp blue-to-black contrast near its eye. We were able to watch three different individuals and had it been twenty I still would have been left wanting more.

There were hundreds more birds glimpsed too fleetingly to make an accurate ID. The forest was alive with an aerial parade of colors in motion. These final few images are of birds I couldn’t quite pin down – if anyone has a clue I’d appreciate the hand. 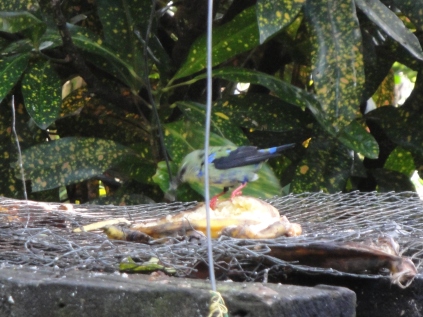 One thought on “Our Costa Rican Honeymoon Part 3: Birds”